i met a billionaire 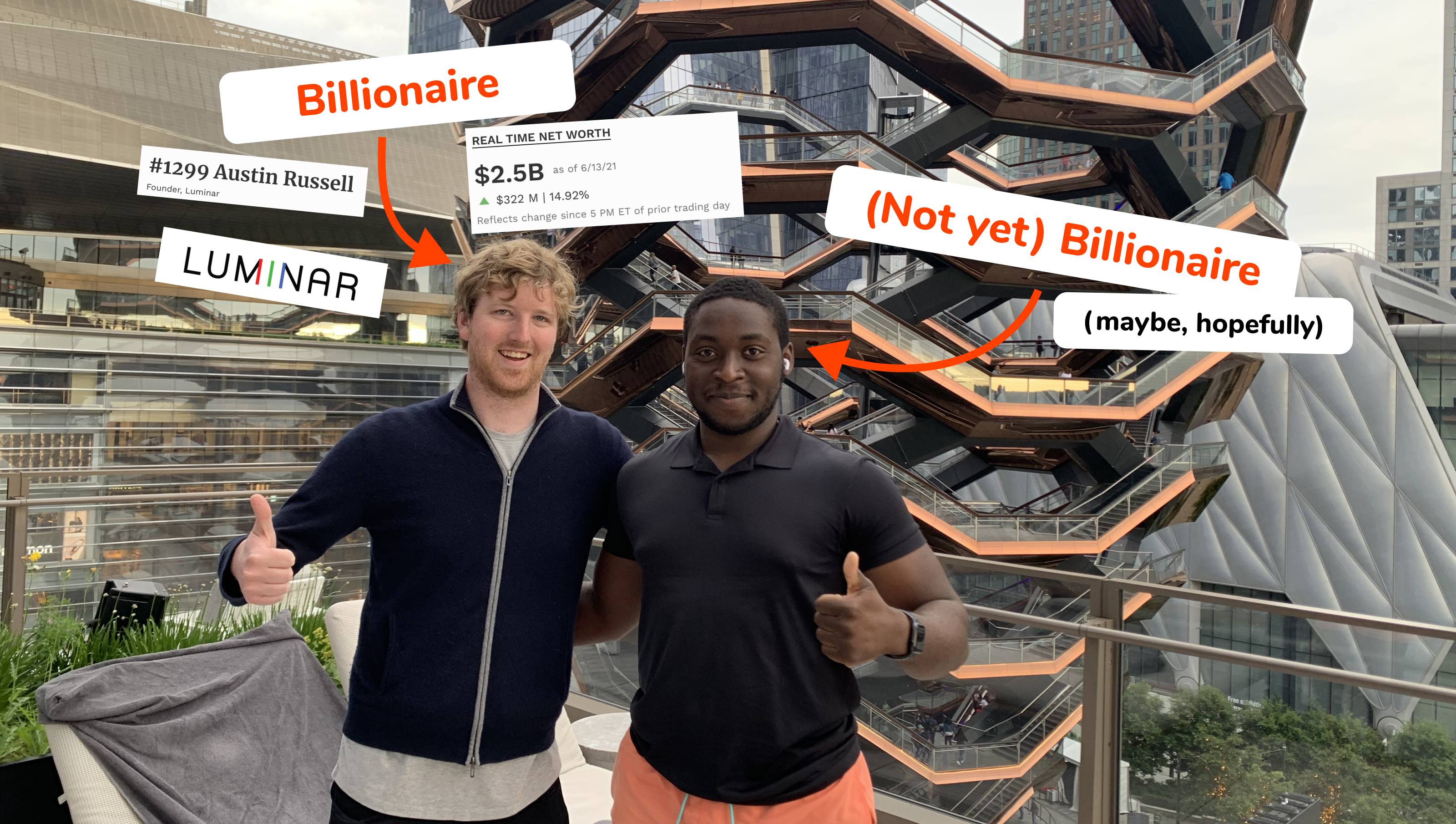 I ran into him at Equinox.

At first, I thought it was just a guy that looked like him. But after extensive googling, I was 90% sure it was Austin Russell.

After working up the courage, I walked up to where him and two others were sitting.

I just wanted to say hi and that I admired what he’s done.

There was an older man and older woman next to him. I thought they were his mom and dad. Turned out they were his VP of Communications and VP of Investor Relations (lol).

After I got to say hi, I went back to little corner to resume work. Later, one of his VPs came up to me and said that before they’d leave for a business dinner, he’d get a picture of me and Austin.

And before they left, we got a picture together. 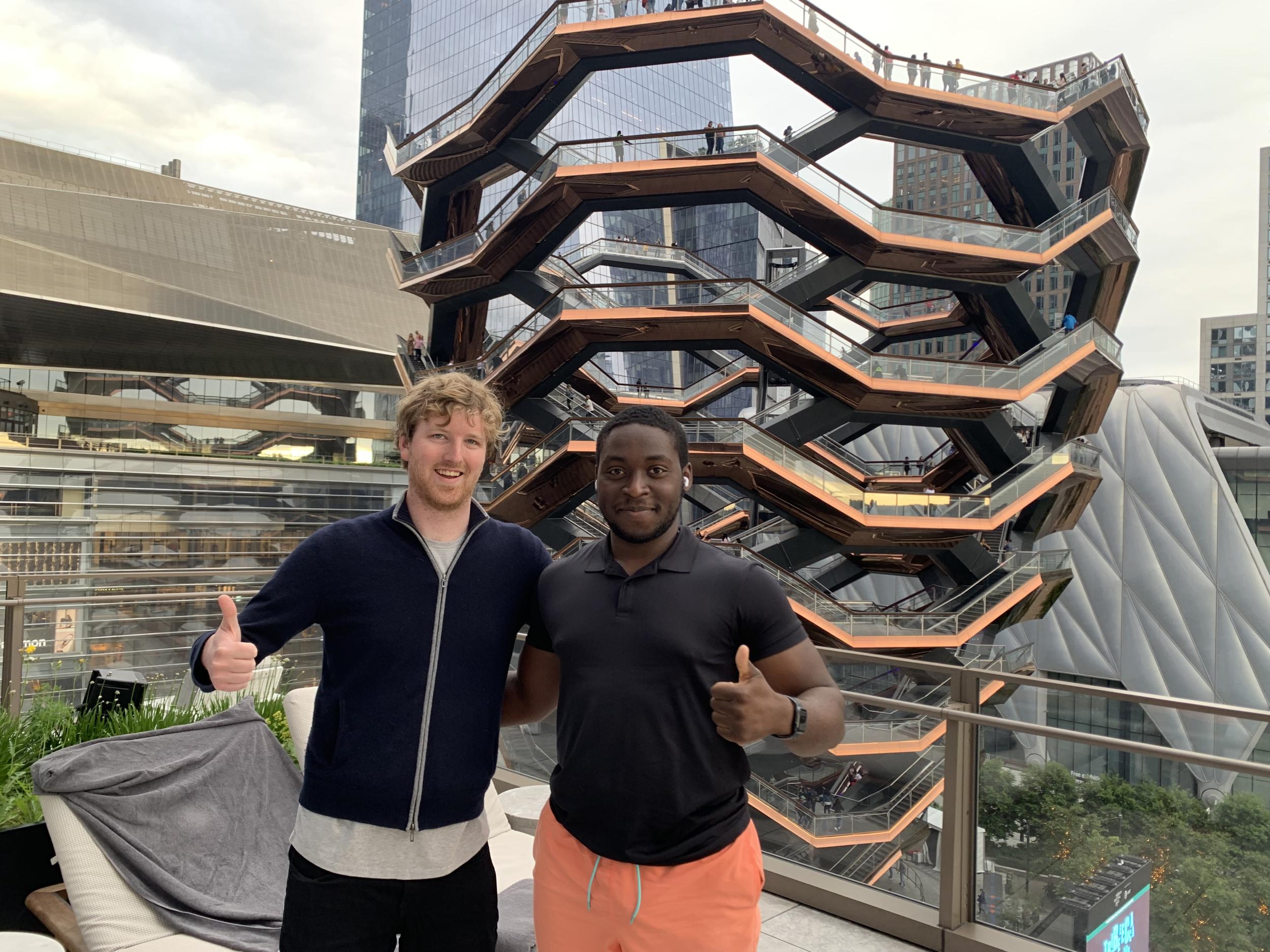 i asked him 2 questions

After the picture, I wanted to ask him a question. You can always learn something from someone— especially it that someone starts laser company at 17 and becomes a billionaire at 25.

1. What’s something interesting you learned since starting Luminar?

A broad question, but it’s a question I ask my guests on PM News all the time. It usually brings at least a small golden nugget out of them.

What he said was basically that it’s interesting what happens when you go deep on a specific domain or problem space and try to become a sort of expert at it.

If you keep at a problem or anything with expertise and focus and you let compounding do its work, good things will happen.

Knowing his background, I can see how that played out for him:

He skipped high school to work with lasers at UC Irvine. Then, he dropped out of college mid freshman year to start, essentially, a laser company…at 17. Expertise.

Then 8 years later, he takes that company public and becomes a billionaire. Focus and time.

(I’d also add in Naval’s aphorism for what you work on is more important than how hard you work. Going deep on lasers in a time where automatous vehicles and LIDAR tech are on the rise definitely helps, in Austin’s case.)

His answer reminded me of new quote that I love, ascribed to both Andrew Carnegie and Mark Twain:

“Put all your eggs in one basket, and watch that basket very carefully”

I asked this somewhat jokingly because I’ve read Fooled by Randomness by Nassim Taleb and I understand that it’s easy to let the narrative of making billions in tech fog up the actual probability.

I wasn’t looking for any “secret” because I know there aren’t any. I wanted to understand how he framed his accomplishment. What mental model(s) he was working under. How does he see it in retrospect.

His response was basically: “ya know, to get to 1 billion (the number), you only need to 2x 10 times from 1 million.”

I liked that he broke it down into a simple math equation.

I don’t have a million dollars (yet). But for me, his answer translated to:

I already have a tendency for working on projects. So this answer got my gears turning and got me thinking about ideas and problem spaces where I could build projects that have the potential for 2x improvements and growth over time.

(Chance encounters like this make me justify my Equinox membership even more.)

Hey 👋, I'm a 22 y/o product designer & NYU student from New York City. This here is my personal blog where I (try to) write everyday.Anthony Diké on Twitter